The UK government has just announced that it isn’t going to make a decision on further relaxing Covid-19 restrictions for another two weeks, just as many people were, quite reasonably hoping that the fat lady was, if not in full song, at least warming up for her aria.

Flippancy aside, let’s be clear: delaying a decision like that is utter nonsense, at multiple levels: whether it’s driven by the use of lagging data, the continuing failure to adopt and use effective forecasting (ours or anyone else’s), the pursuit of political dogma, or any combination of these, they’re once again delaying decision making until it’s too late.

Worse, they seem to be relying on the success of the vaccination program to try to pull a largely fictional rabbit out of their hat – the hat that comes with a large label saying, “Wishful Thinking”. But now for the data and analysis…

Ten days ago, we looked in detail at the forecasting for Scotland, which showed an overall and coming rise in case numbers, driven largely by significant rises in a handful of local authorities. Across the UK as a whole, we were still forecasting pretty flat case numbers, despite the steep rises in a number of individual areas.

But, of course, when policy decisions are being made on lagging data and analysis, rather than on data-driven forecasting, and are then diluted by political expediency, the likelihood was always that those areas seeing rises were going to seed increases in other areas, despite surge testing and an admirable level of sequencing to identify the variants at play.

And that does appear to be what is now happening.

Since the 10th May, 11 of our daily 28-day forecasts for the UK as a whole have been for a steep rise in case numbers, whereas only 5 have suggested either a static situation or a continuing decline. The fact that our system has a tendency to flip like that suggests a still finely balanced situation, but one where the balance of pressure is very significantly upward.

As of 21 May, we noted that rises were still largely restricted to a relatively small number of local authorities and that, even at the regional level, we weren’t predicting huge rises.

We always run our 28 day forecasts from five days before the last date for which we have published  data, which itself is 24-48 hours behind the present. That’s because the last five day’s data are rather unreliable, as they continue to be updated through that interval.  Our last confident forecasts, case rate and R number analysis are therefore for 24 May. We do however use some rather sophisticated normalisation techniques, so we do not believe that either our current calculations or very short term forecasting will be far removed from reality.

Our forecasting, taking 24 May as a baseline, now suggests the following at regional level:

Now for the usual disclaimer: these are forecasts based on multivariate emergent analysis, derived from the historical time series on a rolling basis. In simple terms, that rolling window means that we do, in effect, embed the impact of the vaccination programme and the emergence to date of the so-called Indian (now ‘Delta’) variant, although we don’t fully compensate for the most recent changes in rates of vaccination. Our analytics therefore also assume that response to rising case rates will be reasonably commensurate with previous imposition of restrictions, so any further delay in imposing these as case numbers continue to rise is likely to cause our forecasts to undershoot reality. We fear that we may already be at the stage where some of our forecasts are closer to the best case scenario than the worst case.

As for the R number, as of 29 May, it is sitting at 1.28 for the UK as a whole, and at 1.0 or higher everywhere except Wales and Northern Ireland, with the South-East of England now having the highest infectivity rate: 1.4 as of 29 May (subject to the above noted unreliability of the most recent data). We’d however urge caution into reading much in to R numbers for most local authorities, especially those where absolute case rates are still low (our system will refuse to calculate daily numbers for local authorities whose case rates are sitting below a certain threshold).

The better compound measure, that of the Kinetic Force embodied in the pandemic, is still low across the country as a whole, but is accelerating in Scotland and the North-West, whilst hovering around the neutral zone for other regions and countries, so is close to the tipping point into acceleration. Give it another two weeks before making any decision, and we’re very likely to be seeing significant acceleration and momentum in many more areas. 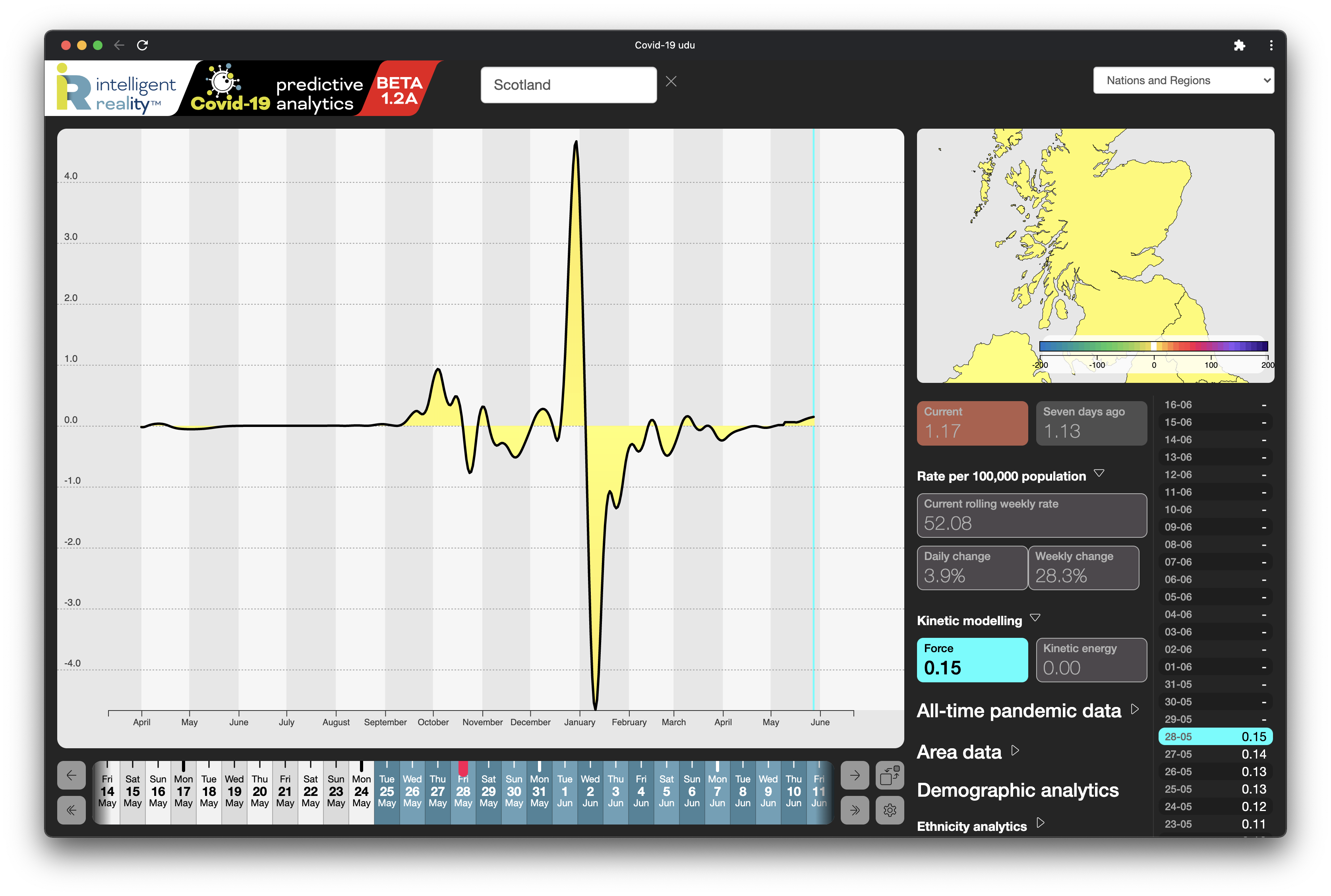 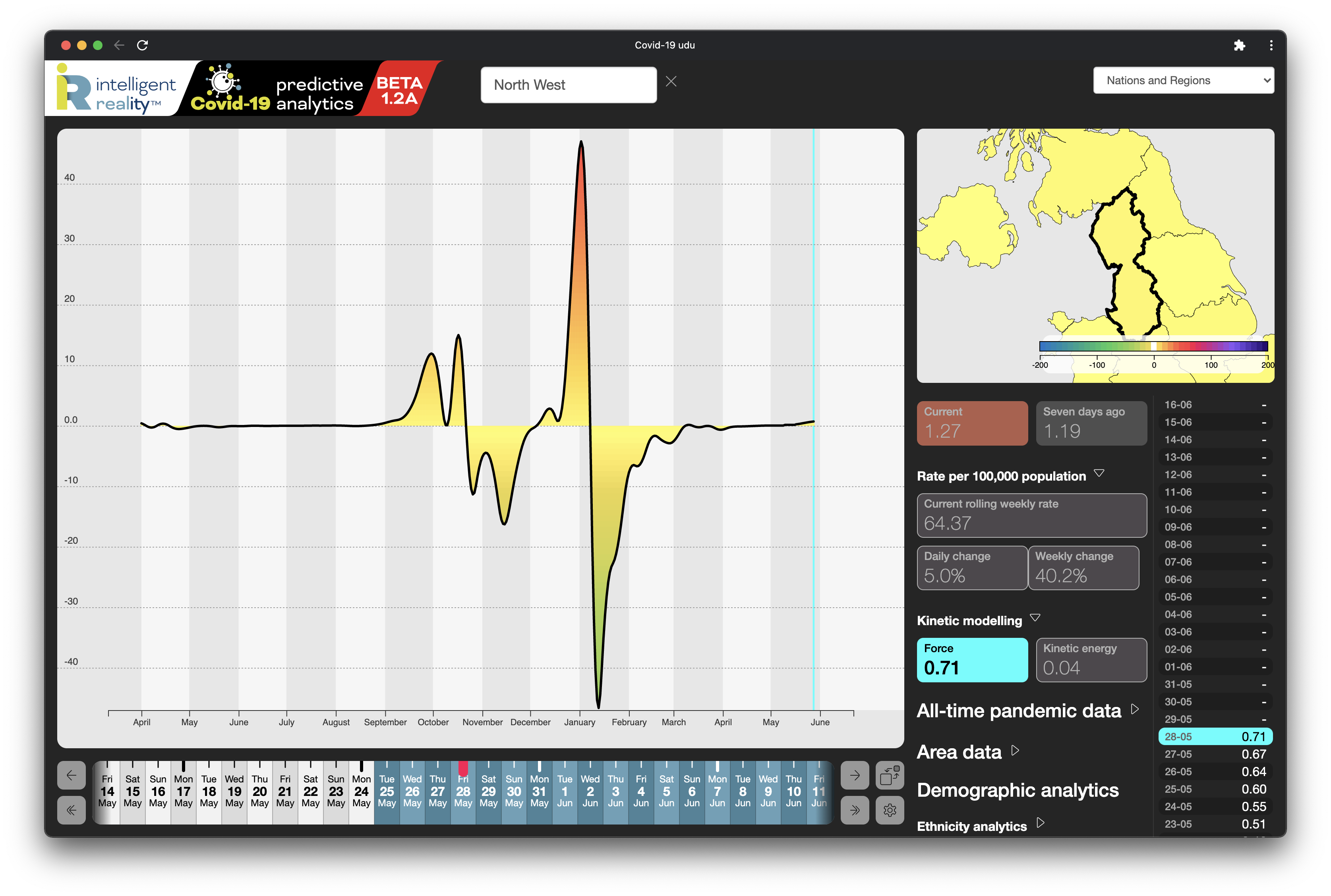 As for case rates, we are obviously still seeing a wide degree of regional and local variation across the UK, but all indications are that the rises are set to continue, still led by areas such as Blackburn & Darwen (currently leading the league table of case rates at 370 cases/100k population/week).

But does any of this matter, given the progress with the UK’s vaccination programme?

Simply, Yes. At last count (28 May) 59% of the UK population had had a first vaccination, and 38% their second. Those are not bad figures, despite what appears to be some degree of supply constraint in vaccines.  That does however mean that, as of this moment, some 27M people are not yet protected at all and that 41M only have partial protection. That’s a lot of people still at risk.

But what does that actually mean, even for those who have been vaccinated, whether fully or partially? Firstly the good stuff: all of the vaccines have a very significant impact on both symptomacity and severity: following exposure, we’re less likely to show symptoms and, if we do, the likelihood of that developing to the point where we need hospitalisation are greatly reduced studies following vaccination suggest a 66-90%+ reduction in that likelihood. And of course, the mortality is greatly reduced. And that appears to still hold for the current range of variants of the virus.

Then there are the facts that the 38% already fully vaccinated should include those with the greatest risk and co-morbidities and that, of the remainder, most people anyway are either asymptomatic or present only as a mild case.

…It does not remove that risk completely, and does nothing to help that proportion of the population who genuinely cannot tolerate a vaccine or should not yet be given it through lack of data (as opposed to the entitled idiots who march around the countryside claiming that they have exemption).

So there’s still a significant proportion of the population who are potentially vulnerable, and a pool who will always remain so. Let’s not forget that.

Worse, the simple fact of vaccination can make the plight of the unvaccinated and vulnerable worse: being vaccinated does not remove the risk of transmission of the virus once you’ve been exposed. There are a range of studies there, suggesting anything from little impact of the vaccine on transmissibility in an exposed individual, to a substantial, but not complete, reduction. In fact, vaccination may be creating a large cohort of asymptomatic spreaders.

If the virus is then being spread through contact between a vaccinated population and the remaining unvaccinated groups through unrestricted interaction, far more people are being exposed to the virus over any given period than has been true during lockdown. So the numbers infected and symptomatic rise.

Then there’s the fact that, good though the vaccines are, they’re not 100% effective, so we’re right  back into a numbers game, where freer movement is exposing more people to that symptomatic infection.

We’re unlikely to end up back at the disastrous levels of death and hospitalisation that we saw at the beginning of 2021, but this pandemic still has the potential to cause a great deal of debilitation and death. And of course, the virus itself is now an endemic dynamic, with new variants emerging all the time. There, we may get lucky, and find that our vaccines continue to protect us. More likely though is that there will be an arms race for the foreseeable future between new variants and the variant vaccines and boosters needed to counter them.

In other words, whatever happens, the fat lady isn’t even warming up. In fact, there’s probably at least a full act to go.

About us: Intelligent Reality is a data intelligence company, using emergent approaches and inferential AI to provide daily analyses and forecasts for Covid-19, currently for the UK. We’re based in Scotland and Germany, and supported by the udu team in the USA. Together we have brought together a highly experienced team of data scientists, designers and epidemiologists to address some of the key problems we’ve seen with the generation and use of pandemic data to support decision making for public policy.