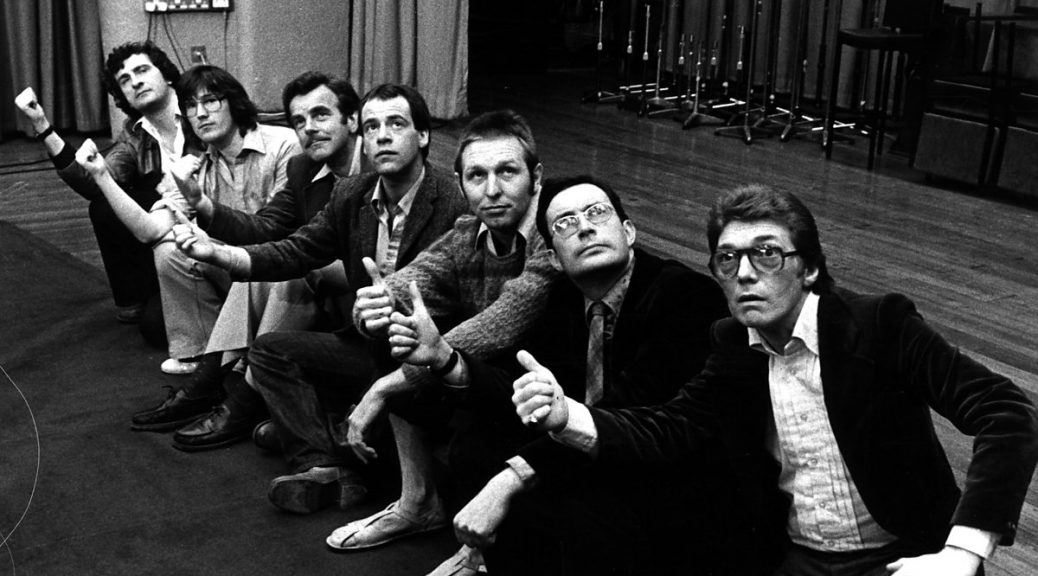 1978. Easter hols from university. I was wandering through my mum’s kitchen – being a student, I was, as usual, in search of anything that could be eaten without dire consequences. I was also, just as usually, ignoring the Radio 4 she always had on in the background.  Except that, this time, the sonorous notes of The Sorceror rang out across the kitchen as I slouched past. That stopped me: as a West Coast hippy misplaced in time and space by a decade and a few thousand miles (here I cite my cowboy boots, bell-bottom flares and a fine collection of Jefferson Airplane albums), anything from The Eagles was OK by me. But on Radio Four?

END_OF_DOCUMENT_TOKEN_TO_BE_REPLACED

There’s an hilarious letter doing the rounds at the moment, purportedly from Stanley Kubrick to MGM. Unfortunately, it’s a fake. But, if you want a real example of how to write to a studio executive, here’s a copy of a fax that Douglas Adams sent to David Vogel of Sony, at a particularly fraught time during our negotiations over the Hitchhiker’s Guide movie. I can personally attest to the veracity of this piece.

This, by the way, is published in The Salmon of Doubt, the final compendium of Douglas’ unfinished works, half-works, nearly-works and random musings.

END_OF_DOCUMENT_TOKEN_TO_BE_REPLACED

“Wildlife Management in East Africa – Is There a Future?” by Dr Richard Leakey

“Is the Human an Endangered Species?” by Professor Robert Winston

Save the Rhino International and the Environmental Investigation Agency are co-hosting the Fourth Douglas Adams Memorial Lecture with a talk by Professor Robert Winston, on Thursday 23 March at the Royal Geographic Society in London SW7. In this talk, he will combine some of the apparently threatening aspects of technology and the trust, or lack of it, in science.

, (with the charming production values of its cardboard and tin foil sets) and, finally, into my own personal involvement as the CTO of Douglas’ company, where I spent the latter half of the nineties and the first couple of years of the millennium immersed in the philosophy, humour, science, ideas and company of Douglas Adams and his works.

Easy then to figure that all of that should thoroughly qualify me to write about this, the decades-longed-for movie. How wrong I was. I’m sitting here, several days post-Premiere. I’ve almost recovered from the subsequent evening of Pan-Galactic Gargleblasters and am at something of a loss about what to write. In fact, I’ve now come to the conclusion that prior experience thoroughly disqualifies me from actually reviewing it. So here it isn’t.

END_OF_DOCUMENT_TOKEN_TO_BE_REPLACED

Last night, and a mere twenty years after its original release, the Twentieth Anniversary edition of The Hitchhiker’s Guide to the Galaxy took the impressively heavy 2005 BAFTA Interactive award for Online Entertainment. For a computer game – a genre reknowned for having a shelf life of weeks rather than years, this is a unique achievement. It’s also a tribute to the principle that intelligent and engaging entertainment is timeless, no matter what the medium, and to the imagination, wit and humour of its authors. So congratulations are very much in order to the memory of Douglas Adams, to Steve Meretzky and to the BBC, Sean Sollé, Shimon Young and Rod Lord, who between them created the Twentieth Anniversary edition. The award itself is lovingly photographed here in the exotic surroundings of a Holborn Pizza restaurant, whose staff created an impromptu homage to the occasion by taking 7.5 million years to serve dinner.

For information including how to buy tickets please see www.savetherhino.org.

Lecture synopsis: Zoologist Mark Carwardine (co-author of Last Chance to See with Douglas Adams) spends more than half the year travelling the world in search of wildlife and exploring wild places.

In this highly entertaining lecture Mark describes some of his experiences and encounters with wild animals and even wilder people around the world – including some hilarious behind-the-scenes stories from Last Chance to See. And, inevitably, he has a thing or two to say about the state of the world.

The lecture will be followed by a fundraising auction, lots will include signed film memorabilia, VIP tickets to the film premier and signed copies of the Quintessential Phase: Mostly Harmless radio script.

The 2nd March 2005 sees the BAFTA Interactive Awards ceremony, in which the BBC’s Twentieth Anniversary presentation of the original Infocom Interactive Fiction game of the Hitchhiker’s Guide to the Galaxy is nominated in the Online Entertainment section. Having been responsible for the simple original online presentation of the game and been a past BAFTA juror, I’m keeping various bits of anatomy crossed for its success. Here’s hoping…

If you’ve arrived here from the BBC site, there’s a potted history of the Infocom game here, which includes never before seen scans of some of Douglas Adams and Steve Meretzky’s original notes and designs, photos taken during development of the game, the original ZIL code from the game development (of historical interest only unless you happen have a spare 1980s vintage DEC-10 computer lying around, but may contain some game spoilers) and extracts from various interviews that Steve has given about life, the game and working with Douglas.


In 1984, Steve Meretzky of Infocom collaborated with Douglas Adams to co-author one of the most successful and notoriously difficult computer games of all time – the interactive fiction of The Hitchhiker’s Guide to the Galaxy. In 1985, the game sold nearly half-a-million copies, making it a phenomenal success for the time, given the number of personal computers then in the world. This wasn’t long before graphic computer games took over, at which point companies like Infocom and Level 9, both of whom specialised in intelligent games of the imagination, went to the wall. It wasn’t really until we released Starship Titanic in 2000 that the art of the conversation engine as a user interface was significantly advanced over Infocom’s parser, itself derived from the original work by Crowther and Woods at MIT in the 1970s. I still fervently believe that a natural language interface is the future of interaction and that universal communication by e-mail and text messaging and the blogosphere represents a re-evolution of the word as a means of interaction. Returning hastily from that small contextual digression, here’s a compendium of Steve Meretzky’s thoughts on the original game, working with Douglas and the fate of the interactive fiction industry. Thanks to Steve for providing this and giving permission to publish it here.

What about Douglas Adams? Working with him was a good experience?

Working with Douglas was great. He had such a different perspective on things, and came up with puzzles and scenes that I’d never have thought of in a million years on my own – having the game lie to you, or using a parser failure as the words which fell through a wormhole in the universe and started an interstellar war, or having an object like “no tea”. On the other hand, the man is the world’s worst procrastinator! I had to practically camp out on his doorstep in England to get him to finish his stuff for the game.

How did you come to work with Douglas Adams?

What was he like? Douglas was an Infocom player and fan, and so when he and his agent and his publisher began discussing the subject of a computer game adaptation of Hitchhiker’s Guide, he was pretty adamant that it be with Infocom. Marc Blank suggested that I collaborate on the game with Douglas, partly due to fortunate timing (I had just completed Sorcerer), partly because many people had found Planetfall to be reminiscent of the humor of Hitchhiker’s Guide, and partly because I was the only implementor who was as tall as Douglas. The best way to describe Douglas is that he’s the ideal dinner companion. He can speak intelligently and with wit about almost any topic under the sun. Unfortunately, as a collaborator, he suffered from the fact that he was the world’s worst procrastinator! I had to practically camp out on his doorstep in England to get him to finish his stuff for the game. Otherwise, working with him was great. He had such a different perspective on things, and came up with puzzles and scenes that I’d never have thought of in a million years on my own – having the game lie to you, or using a parser failure as the words which fell through a wormhole in the universe and started an interstellar war, or having an object like “no tea”.

END_OF_DOCUMENT_TOKEN_TO_BE_REPLACED

Back in 1998, I turned my wider interest in archaeology to something more specific to my profession: software archaeology. A long session of clambering and excavation in my attic revealed my 1985 copy (on floppy disk, yet) of one of the most compelling and insane frustrating computer games of the time, The Hitchhiker’s Guide to the Galaxy. Under laboratory conditions, I then callously performed a dataectomy on it – extracting the game content from the enveloping application. The next step was to source Java interpreters that could run the extracted game data online, and on a variety of portable devices. The result is what first appeared on the TDV web site. I also ported it to the Palm and Newton, installing a copy on Douglas’s own Newton when he wasn’t looking – I’m not entirely sure if the subsequent exclamation was one of pleased surprise or historical pain.

I then, with permission from Activision, who’d taken over the code (but not script) rights when Infocom folded, used the game, in Java form, as part of the 1999 Comic Relief web site. Plans to release it formally as feeware on a variety of mobile platforms were put temporarily on hold when TDV was sold off, and things then lay quiet for several years. That was until 2004, when my erstwhile colleagues, Sean Sollé and Shimon Young, took the data file and, working with Rod Lord – the artist who created the graphics for the original BBC TV series – created a complete client-server implementation of the game, with a C++ application on the server and a very nice Flash-based browser interface. This has been released on the BBC’s web site, where it has been a huge success, resulting in an Interactive BAFTA award and the latest version, the Twentieth Anniversary Edition.

So if you want to play the game, I’d very strongly recommend you do so on the BBC’s web site, where you can make “Ooh” and “Aah” noises at the graphics and, usefully, save the game as well, something the original Java implementation couldn’t do. That I’ve included here, for historical reasons, along with the 1999-2001 introduction and help information I wrote (itself now being used by the BBC).