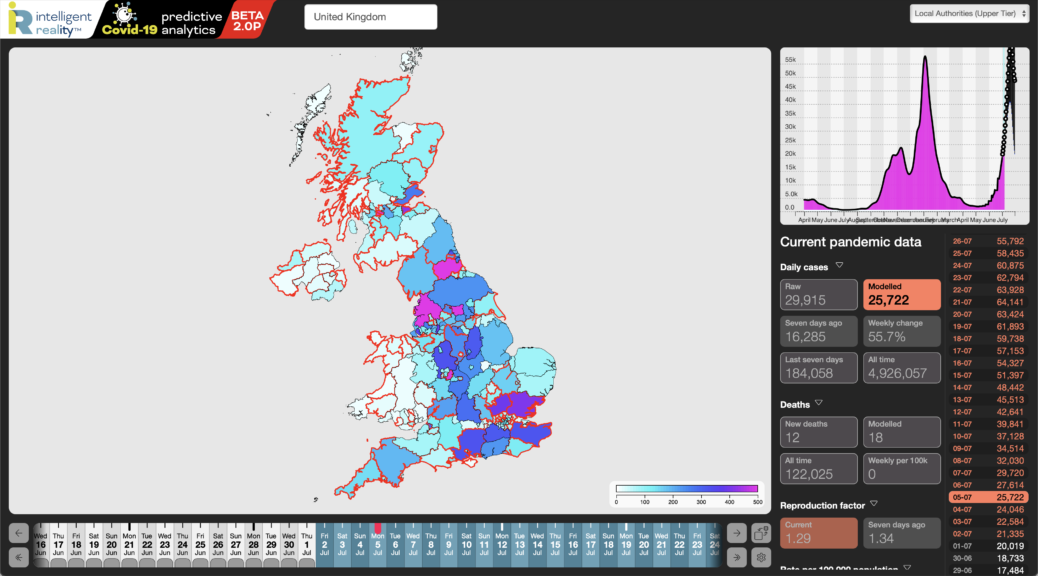 We’ve already shown that our forecasting system has been effective in providing advance warning of the current Third (or Fourth, depending on how you’re counting) wave of Covid-19 cases.  With that wave now fully established, we’re looking again at our forecasts, the core data and our dynamic analyses of the pandemic, especially given the latest UK government policy.

With the UK’s rolling weekly case rate now at 238/100k population, up 60% on a week ago, and 40% of the way to the January national peak, we are not reassured. Looking at the behaviour of Chris Whitty’s eyebrows during government briefings, we suspect that neither is he. The current wave is so far unevenly distributed, with urban centres showing the biggest rises, in many cases well above the January peak with, as previously noted, an apparent strong association with those areas most engaged in the Euro 2020 competition. Given little restriction on movement, we believe that these centres of infection are in the process of seeding a ripple of infection across the rest of the country.

Taking home turf as an example, case numbers (using our model that compensates for reporting irregularities) are currently way above their January peak in both Glasgow (As of 6 July, a rolling weekly case rate of 458 cases/100k population, versus 380/100k at peak on 10 January) and Edinburgh (579/100k population, versus 232/100k at peak on 7 January). Scotland as a whole has a current case rate of 399/100k, versus 278/100k on 5 January.

Our forecasting does show an coming downturn, but we rather suspect that’s because we’re in new territory, where a rise in case numbers is not being followed by increased restrictions – quite the opposite. As our model informs itself from past experience, it’s effectively forecasting what would happen to case numbers if restrictions were reimposed, rather than a wholesale abandonment of them, which is what we’re seeing right now.

So, with no current sign of increased lockdown, we suspect our forecast beyond 10 days to be very optimistic. Even with our shorter term outlook, our forecast shows UK daily cases exceeding 50,000 by 18/19 July.

The bigger question of course is whether this now matters. In short, yes, it does: Vaccination doesn’t prevent all infection, doesn’t suppress transmission, there are still large parts of the population who, in any case, aren’t yet protected, and acquired immunity, whether from infection or vaccine, decays over time. Combine that with the emerging data on the impact (especially on younger people) of Long Covid, and it looks like we’re cruising complacently into a rather nasty situation – death is not the only debilitating long-term outcome from Covid. Chris Whitty yesterday quite rightly warned of a nasty winter to come: that looks like a masterful understatement.

The partial decoupling of hospitalisation from cases is welcome, and that between hospitalisation and death even more so, and has given us a breathing space to formulate new policy. There is no sign of such a policy, and it doesn’t address the fact that the current rise risks overwhelming the system with sheer numbers. That’s even before we factor in that there will be more variants of the now endemic virus to come, which will, at some point, circumvent current vaccines, in whole or part. Without now putting into place measures to protect the most vulnerable and ensure that mask wearing and social distancing continue (at the very least – and the more infective Delta variant requires more, not less, separation and barriers), we are heading into a whole new era of this pandemic. And that’s before winter ‘flu’ kicks back in (Whitty’s point).

So, given that our own forecasts and the current ICL modelling appear largely in agreement (they and we use different approaches to generate our respective forecasts), it appears that current policy is now, again, about influencing the timing of the wave, rather than suppressing it.

There are valid arguments about both principle and policy there, but doing so whilst abrogating all responsibility for precautions and for identifying and supporting those who remain vulnerable to the full force of the virus is irresponsible beyond belief.

Update on 7 July: Our analytic run overnight now suggests that we’ll be seeing UK daily case numbers (by confirmed test date) in excess of 60,000 by 18 July. That’s nearly 10,000 up on yesterday’s forecast. Given that, and the fact that our kinetic models now show the ‘energy’ of the pandemic now approaching that of the Autumn peak, we’re more firmly of the opinion that the 3-week+ outlook in our forecasts, showing a downturn, is being optimistic.

One thought on “Third Wave Rising”