A remaining big unknown in the pandemic is not whether vaccines reduce serious symptoms, hospital admissions and deaths – they do – but whether and to what degree vaccines reduce the ability of those vaccinated to infect others, whilst not being symptomatic themselves. As we’ve noted before, initial data on post-vaccination infectivity was somewhat contradictory, so we don’t yet build the impact of vaccination on infectivity into our forecasting.

Our initial forecasting is always entirely data driven, derived from our analysis of the data from the pandemic, at various geographic levels – we don’t impose any model or prior assumptions. We then track (hindcast) our forecasts against what then actually happens, then using the difference between the two as a delta against which we can correlate a wide range of additional factors against, to break down that difference. And, as long as those factors consistently then support correlation against future forecasts, they become part of our forecasting.

So, when our forecasts were proving optimistic relative to what then transpired, we introduced the known infectivity of the B117 variant. That accounted, consistently, for most of the difference we were seeing as the pandemic ramped up in November and December. When we were being pessimistic, in late January and February, relative to historical patterns, we realised that was actually telling us that government policies were being more effective than hitherto (although that should actually read, “less ineffective”, given the overall body count in the UK).

Given the lack of reviewed and consistent publication to date on the subject, we’re not yet in a position to adjust our forecasts by known and reviewed data for the impact of vaccination on infectivity.

What we have just done however is run some simulations based on assumptions, ahead of seeing reliable epidemiological studies (which should be forthcoming very soon).

We chose to assume that 50% of the population has been vaccinated to a degree that provides one of the following scenarios for post-vaccination infectivity: 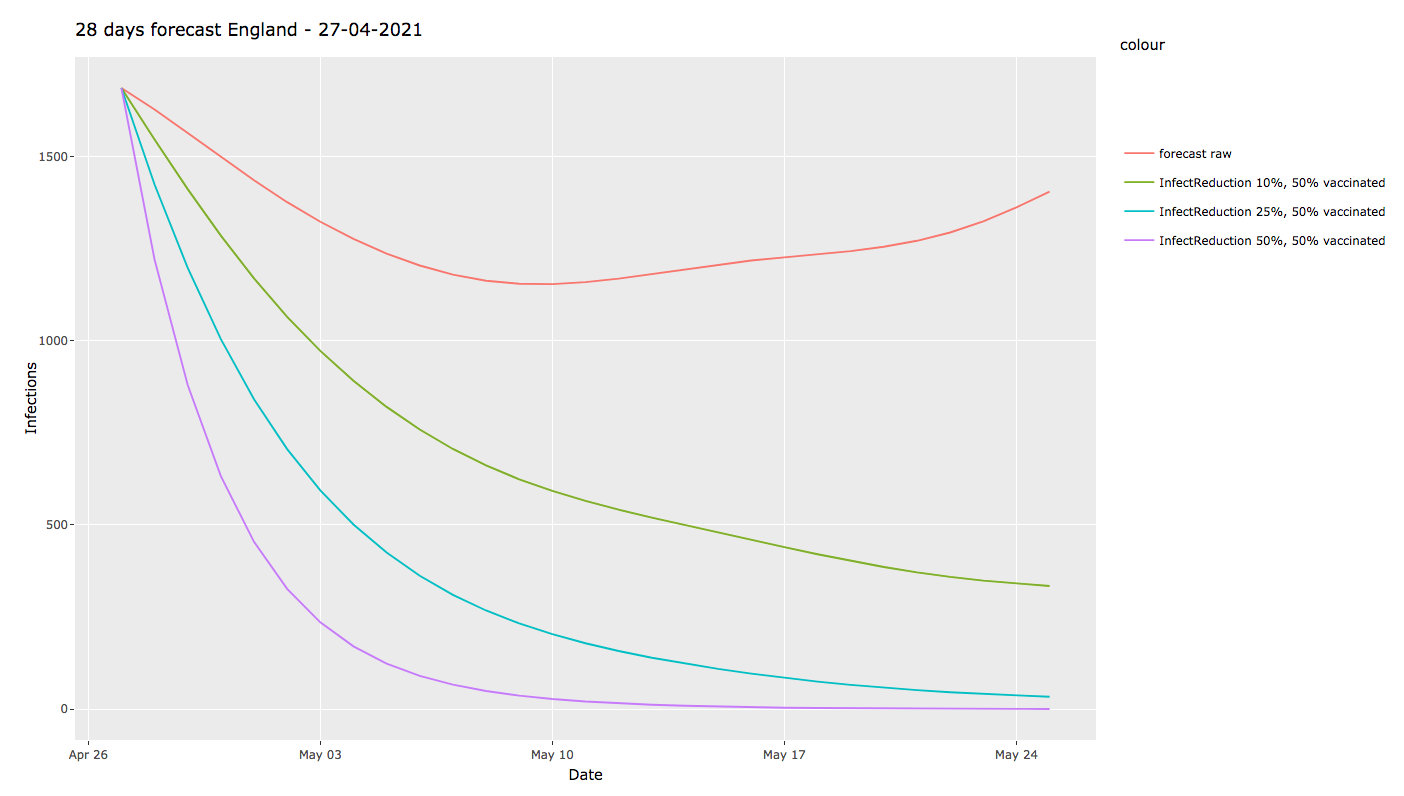 Here we see that, whilst our current forecast shows a bottoming out of case numbers around the 9th May, at 1150 daily cases, we then see a steady rise to 1400 daily cases by the 25th May. Which is pretty much what you’d expect from increased social mixing in the general population, and which would hitherto have been a precursor to another surge in cases.

These figures are for England, but see no reason to expect that there would be much digression anywhere else: in fact, we chose to run these assumptive simulations after being prompted by Shimon Young, about what’s being seen on the ground in Israel.

We’re well aware of the exponential nature of case rates, depending on whether the R number is above or below one. But here, any reduction in infectivity, post-vaccination, appears to have a dramatic impact on our forecasts. There does seem to be a law of diminishing returns here, such that any reduction in infectivity makes a dramatic difference, up to around 30% or so, beyond which the numbers still reduce, but by a lower factor, simply because transmission becomes almost too low to measure.

These are the sort of ‘what if?’ simulations that it’s now very easy to build into our model. I do have to emphasise that they are not yet based on evidenced and reviewed studies of the actual impact on case numbers of vaccination – these are purely speculative simulations and, as soon as we receive actual data, we’ll be able to update these simulations with real data and then validate against the actual progress of the pandemi.

Coincidentally, Prof. Neil Ferguson of Imperial College was interviewed today,  presenting a very optimistic view of the pandemic in the UK, albeit with the same caveat we always use: the potential emergence and spread of SARS-Cov-2 variants that circumvent vaccine protection.

We had the idea of running this as a simulation at 9am today. By 1pm we had the initial results and the rest of the day has been spent double-checking our numbers and methodology. I wonder just how long simulations are taking to set up and run with more traditional approaches to data analysis?