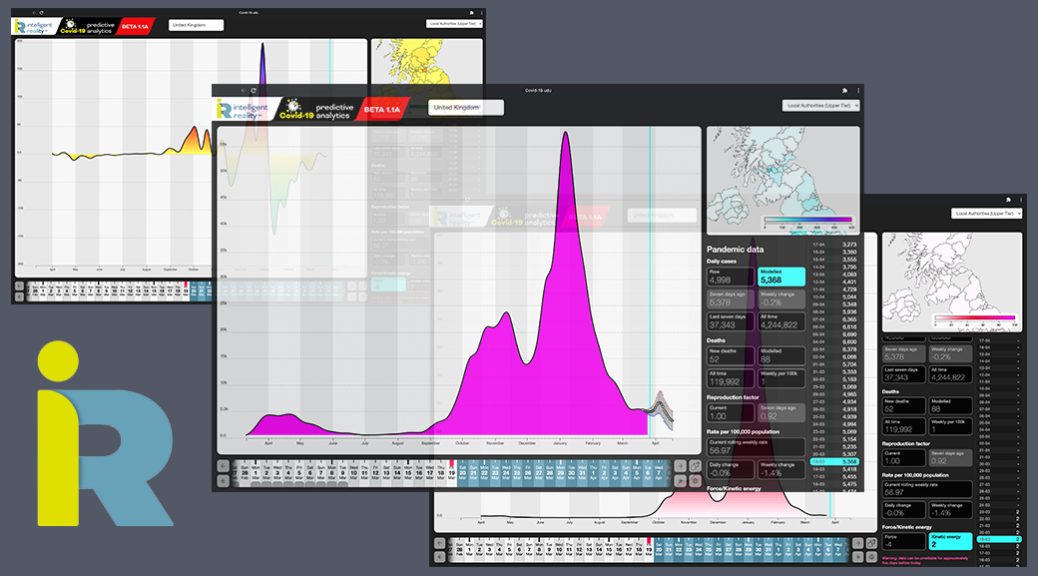 We all want a normal life. And politicians feel the pressure from their parties and constituents to restore normality as rapidly as possible. Unfortunately, there’s a dissonance between their reluctance to then take needful and decisive action at the earliest possible opportunity and the long-term consequences from the pandemic, where a tendency to treat the pandemic as transactional – something you can bargain with – has driven a patchwork, limited and often counterproductive response to the pandemic.

That’s been particularly evident in the UK, where it is readily demonstrable that an early refusal to recognise the severity of the problem, followed by repeated failures to take appropriate action at the right time, has lead to tens of thousands of entirely avoidable deaths.

After an apocalyptic end to 2020 [Figure 1], we are now at a stage where case rates are falling, albeit at a lower rate than of late, and it does appear that there is cause for cautious optimism for the later part of this year.

This is evidenced by our own emergent forecasting, which, roughly speaking, mines the entire history of the pandemic so far to identify metrics, patterns, relationships and trends. For most of the latter half of 2020, our forecasts were usefully accurate (typically to 85% over a 14-day look ahead) and, even after we moved to a 28-day outlook, accuracy was well maintained, naturally with a greater range of uncertainty the further ahead we looked. And forecasts are just that – probabilistic estimates based on history and current circumstances that help inform and validate decision-making – if we were consistently making completely accurate predictions, we’d have retired to our own private islands by now.

From about mid-January to early March however, our forecasts were consistently more pessimistic than actually turned out to be the case. Moreover, they had a tendency to flip from predicted imminent rises to falls on consecutive days.

This is information in itself, as the ‘pessimism’ actually indicates that policy and actions have been more successful than they were earlier in the pandemic at controlling the spread of the pandemic.  There are multiple factors at work there, but there have been definite signs, even in the UK, of the science actually being listened to, rather than simply being used selectively as a prop for political decisions more influenced by ideology and expediency. The day-to-day volatility in our forecasts however is indicative that momentum remains in the pandemic and that it could easily flip back into a quite dramatic rise. That in turn is shown by our kinetic modelling of the momentum and force (acceleration and rate of change of acceleration) in the pandemic, shown here for the whole UK. From these we see that, whilst the momentum in the pandemic is back to roughly where it was in late September [Figure 2] (although still higher than at any point during the first wave), the rate of deceleration has been falling dramatically [Figure 3], to the point where it briefly started accelerating during early March, before falling back slightly.

Unfortunately, that phase of progressive improvement may be ending, driven by a creeping degree of political wishful thinking  and those unacknowledged factors in the dynamics of the pandemic that are proving inconvenient to address, given that both undermine the narrative of irreversible progress that governments are seeking to establish.

The first area is hardly unique to the UK, but has had particularly tragic consequences here. There are two elements of the second to now address, partly because they’re worrying us and partly because they don’t seem to be being addressed by those responsible for agreeing public policy. These are:

In adversity, success drives change, as your opponent adapts their tactics to counter your advances. In evolutionary terms, the success of social distancing, lockdown, clinical interventions and, now, vaccines, create selective pressures on the virus itself: the better we do in controlling it, the more aggressively mutations will be selected for where they confer an advantage in transmissibility and infectivity. So what works at any given time is likely to prove less effective as time goes on – for instance, there is good evidence that the more infective B.1.1.7 variant actually requires wider social distancing than earlier variants, something that has not however found its way into public policy. So, the better we do, the faster the virus will adapt.

This doesn’t (yet) show any signs of turning into a replay of the Retreat from Moscow, but the lesson is that, for the foreseeable future, we need to allow for continuous and sometimes rapid challenges to our assumptions, models and behaviours, to recognise those and be prepared to adapt our own behaviours to suit.

This is the top of our heap of concerns. It’s not about the effectiveness of the vaccines themselves, where all the evidence is that they do exactly – or better than –  what it says on the tin, but of just what they’re effective at and how this is then portrayed in the wider media and policy.

We have been taking advice from the epidemiology side of our team, and we see that much of the press and political coverage of the vaccines either ignores or conflates the differences between the vaccines as reducing hospitalisation and lethality and their role in suppressing transmission of the virus.

To rather over-simplify the clinical case, Covid-19 presents in three main ways: as an upper respiratory tract infection (URT), in the lower respiratory tract (LRT) and as a gastro-intestinal (GI) condition. Of these, the first, the URT presentation, is typically that of the fluey symptoms that we’re so familiar with in Covid. URT-presenting Covid tends not to be particularly serious in otherwise healthy individuals. GI-presenting Covid typically appears as a fever with diahorrea, and appears in <10% of cases. Again, it doesn’t usually require ICU-level treatment in generally healthy people. It is however the second of these, the LRT-presenting cases, which is the killer. And it’s the LRT cases that the vaccines are most successful at preventing or mitigating. Which is exactly what we’d hope.

The big howevers here are that URT infections are those most responsible for transmission in the general population, and that there isn’t any evidence that vaccines suppress infection or transmission to any significant extent. In fact, what the vaccines can do is to turn more of us into asymptomatic spreaders of the virus if we fail to maintain our social distancing and basic precautions after vaccination.

Being vaccinated then is not a magic bullet against the pandemic, or at least won’t be until we’ve reached full coverage and put into place the regular booster process that we’ll need to cope with decaying immunity and new variants. Even then, we’ll still need strict precautions to support those elements of the population who genuinely can’t have the vaccine through immunocompromise or other conditions.

This is emphatically not  a diatribe against vaccines or vaccination – quite the opposite: they are our way out of the pandemic, but the point is that the path from here to there is neither as simple nor as predictable as many of those in public office would wish to believe and, by extension, would wish us to believe.