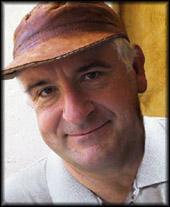 I lost a friend and colleague last week. Like all the best friends, he was an inspiration, an irritation – the grit in the oyster of thought – and an endless source of provocation, ideas and damn good lunches. He had a unique ability to make the inexplicable obvious. And vice versa. Most of us, if we’re lucky, manage perhaps a little of each of these during our lives, with family, friends and colleagues. Douglas managed to do it over more than twenty years and for millions of people around the world. The many thousands of messages on his web site all express a shared feeling of shock and incomprehension.

A week later, that feeling persists – and I now think I’ve worked out why – we’re all waiting for the punchline – he always took a while to get around to delivering them, but always via interesting diversions. Now he’s on the biggest diversion of all, so I think we’ll be waiting a little longer than usual this time.

His legacy of published works will last forever and there’s now a major exercise in electronic archaeology required to dig out the talks, articles and works-in-progress that can be extracted from his extensive and chaotic network of Macintoshes.

He was also an energetic patron and supporter or environmental charities, in particular the Dian Fossey Gorilla Fund and Save the Rhino International.

He’ll still continue to inspire. I just wish he were around to irritate. I and many others lost a friend. Jane and Polly have lost a husband and father. All our thoughts are with them.

Douglas was cremated with his towel.

Small postscript: on 17 June 2001, the UK Sunday Times published an article of more than usually breathtaking ignorance and contrived sensationalism about Douglas. The article itself has long gone from their web site, but didn’t in any case merit the traffic. My personal response is here. I hope it goes some little way toward summarising the general outrage.